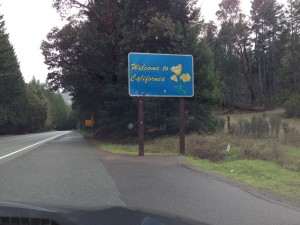 This contest is now closed! Connie Que is my winner. Thanks to all for visiting, commenting, and spreading the word–Connie, I’ll get in touch with you by email!

Last week, my husband, my ten-year-old daughter, my eight-year-old son and I drove from our Seattle-area home to San Francisco and back. We covered 1,962 miles. Afterwards, my husband said he was seriously contemplating driving another 38 miles just to be able to round off the total.

We spent a full day under the redwoods in northern California. My daughter must have said, “This is the best day ever,” more than ten times. Even my son, who was dubious that there was a tree on earth that could impress him, was wowed by the scale.

It was pouring, but the canopy kept most of the rain off us, and my 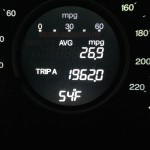 kids never complained. In fact, they didn’t complain the whole trip, not even when we walked 6.2 miles one day in San Francisco, including the daunting up-and-down stretch of Lombard Street from Coit tower to the Crookedest Street.

None of us complained. Not about the cars roaring by as we walked most of the way across the Golden Gate bridge, not about the lousy Mexican food we ate in Crescent City, Calif. Not about the haunted quality to the nearly abandoned hotel we stayed in. There was nothing to complain about, because all of it, everything, was part of the magic of going.

Road trips are contradictory for me. In general, I get stressed out by travel and packing, but I’m never stressed on a road trip. I like to know what’s going to happen next, but the best part about a road trip is never knowing where you’re going to eat or stay next. I get bored easily, but somehow, I am never, ever bored in the car. 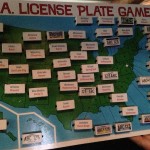 My post-vacation resolution (I almost always make one): I am going to try to think more about going and less about where I am, in the hopes of bringing a little road trip magic into my every day life.

Comment below and tell me about a road trip you loved or one you’d love to take (or anything to do with road trips).

I will randomly select one winner (18+ and able to receive a gifted ebook, which usually means U.S. and Canada) who can choose one ebook from this list of my favorite road romances: Tessa Dare’s A Week to Be Wicked, Kristan Higgins’ My One & Only, Ruthie Knox’s Ride With Me, and Meg Maguire’s Caught on Camera. Contest ends 11:59 p.m. Thursday, April 10.

This contest is now closed. Thanks so much to everyone who visited, commented, and signed up for my newsletter!

It appears that you can now purchase Still So Hot! in paperback from Amazon  and Barnes & Noble (though technically its release date is Jan 1). Still So Hot! is my debut Harlequin Blaze, the story of a dating coach, Elisa, who flies with her prize celebrity client to a resort in the Caribbean to help her protege become a more successful (and less self-destructive) winner of men’s hearts. Only, en route, they acquire a third party: Elisa’s ex-one-time-super-hot-not-quite-realized fling and former best friend, Brett Jordan. 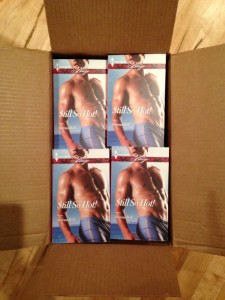 At first, I was kind of nonchalant. I have three stories out there already, stories that people have bought and read and reviewed, loved and hated (though, thankfully, not in equal proportions). So what’s the big deal about this box of 48 books? (Aside from the fact that the cover is quite aesthetically pleasing, that is.)

My nonchalance lasted until I happened to pick up one of the books and thumbed through it, and then it was all over, because my brain—the reptilian, primitive part that’s often useless but sometimes way smarter than I am—registered exactly what the big deal was. OMG! It said as I mindlessly rifled pages. YOU WROTE THOSE WORDS.

And there it was, as much as I didn’t want to admit it, the power of the “real” book.

Don’t get me wrong. I love e-books. Love them. I read almost exclusively e-books. And my first three books? All, quite happily, e. But there was something about this experience, of holding my paper self in my hands, that was brand new, and deeply lovely.

So you guys can go ahead and lick the cover all you want. I’ll just stand here and flip through these pages, admiring MY WORDS. (Scroll down for an excerpt!)

I’m going to give a signed paperback copy of Still So Hot! to one random winner of today’s giveaway (must be 18 years or older and in U.S. or Canada). To enter, you have to do two things:

1. Sign up for my newsletter here. It’s infrequent and you’ll be notified when, for example, the e-version of Still So Hot! is available.

2. Comment below and tell me whether you e-read (and which reader) or read paperbacks (and, if you want, why).

Excerpt from Still So Hot!

Elisa Henderson had imagined worst-case-scenario headlines even before her plane took off.

God, this was not comforting. She needed to get up. She needed to move. Most of all, she needed to find out whether Celine Carr had made the flight. But she couldn’t do that until the Fasten Seat Belt sign blinked off.

She’d gotten Celine’s text just as Elisa had arrived at the gate. Thru security. Gotta pee. Board without me. She’d taken her seat in coach—alone, since Celine had claimed the last available in first class. Elisa tried to catch a glimpse of Celine, but the aisles were filled with other passengers. By the time Elisa had realized they were about to take off, she still didn’t know if Celine was on the plane, and the flight attendants wouldn’t let Elisa up. She’d tried to call and text Celine a million times, until a redheaded flight attendant pleaded with Elisa to put the cell phone away before she got them both in trouble.

Now all she could do was cross her fingers and try not to fidget.

Think positive. She’s on the plane. She’s raring to go.

This is the weekend you teach her that she calls the shots. That she controls her dating destiny.

This is the weekend you make hiring a dating coach the new black.

She took a few deep breaths and focused on positive visualization, which always helped her beat stress: Celine, sitting in first class, smiling and signing autographs, ready to make the best promo video ever. Celine, strolling the white-sand beach at the edge of the aquamarine Caribbean, hair blowing in the breeze, beside a handsome, attentive man. Celine, confident and competent, beaming her appreciation as she said to Elisa, Thank you. You helped me see that I didn’t have to keep making the same dating mistakes. The right man was out there. Imaginary Celine tossed her hair, gave her guy a sidelong glance and linked her fingers through his. Thank you for this wonderful man.

Elisa loved the thrill of the match, the click of satisfaction she felt when she fit two people together like puzzle pieces. Plus, she loved running boot camps, intensive one-on-one weekends where she observed her clients in real-world dating situations and taught them new strategies. These weekends were a great chance to get to know a client well, learn her quirks and boost her self-esteem. And who could argue with a weekend in the Caribbean? Elisa was lucky that her sister’s friend knew Celine’s publicist, Haven, and had been willing to put them in touch. And maybe a little bit lucky, too, that Celine was already undergoing a major image revamp as Haven tried to halt her slide toward celebrity train wreck. It hadn’t been too hard to convince Haven that a high-profile boot camp could turn Celine into a dating role model instead of someone whose antics reporters mocked. And if Elisa could make that happen for a rising star like Celine Carr, she’d have the added bonus of building her business’s brand in a big way.

On the other hand, if Celine had missed the flight, Elisa would step off this plane into a barrage of firing flashbulbs and mocking voices calling out, “Where is she?”

Rendezvous Dating? Isn’t that the business run by Elisa Henderson? The one who lost Celine Carr on the way to St. Barts?

She knocked her head against the back of the seat and closed her eyes.

The seat belt chime sounded. She unbuckled herself and hurried down the aisle.

“Whoa,” said a deep voice, very close. She drew up abruptly to avoid a collision, and, for a moment, her mind was overwhelmed by a confusion of hands steadying her, a broad chest blocking her view and the smell of soap.

Then the voice said, “Lise?”

No. No. It wasn’t possible. She knew that voice. Way too well. That voice represented a years-old friendship and B-grade movies and Chinese takeout and Scrabble games and that bar they’d gone to so often, the Aquarium…

The eerie light of that bar, a blue-tinged drunken haze, the stumbling walk home, her couch, his fingers in her hair, the taste of a mouth she’d longed for so badly she hadn’t admitted it to herself, his tongue stroking hers, waking up every nerve ending in her entire body…

What the hell was Brett Jordan doing on her flight to the Caribbean?

This contest is now closed, but look for another giveaway as part of next week’s Tuesday Tidbit! Chris G is the winner of this giveaway; I’ll contact her directly about her prize.

I’m no domestic goddess. My husband does most of the grocery shopping and about three-quarters of the cooking. My house is clean enough not to be terrifying, but no cleaner. I’m mostly indifferent to the state of my gardens and yard, and I’ve never been the kind of mother who sets up complex craft projects for my children on a regular basis. But there’s one time of year that brings out the small buried bit of Martha Stewart in me, and that’s Halloween. When it comes to costumes for my kids, suddenly, I am in full gear. 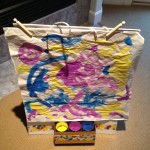 This year, my seven-year-old is a light switch, and my ten-year-old is a kindergartner’s art easel. I made both costumes from scratch — the light switch is a piece of foam board with a small box — the switch — that swivels on a dowel inside a cutout. He’ll carry a lantern he can click on and off if anybody flips his switch. The easel is two pieces of foam board, one with painted paper clipped to it, the other black, with chalk drawings. There’s a small tray with cans of paint (empty veg cans with the tops painted to look like there’s paint inside) and brushes.

In past years, my kids have been: a rainbow, a blueberry, a paperclip, a pencil, a bat — the flying kind, not the hitting kind — all constructed at home. My 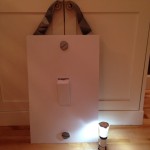 husband and I have noted that my ability to transform my children into household objects is probably related to my ability to win Pictionary — I can’t draw worth a darn, but I have a special gift for capturing the essence of things in ridiculously simple line drawings — and apparently, for turning kids into stuff. 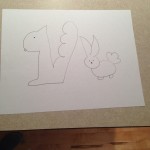 Comment below, and enter to win a copy of Heating Up the Holidays, a sexy e-book bundle with Thanksgiving, Christmas and New Year’s stories by USA Today and New York Times bestseller Lisa Renee Jones, the talented and popular Mary Ann Rivers, and me. I’ll randomly draw one winner on Friday morning, November 1.