I’ve seen a lot of information about how to use Twitter and what to say and not say on Twitter, but one thing I wish I’d had before I ever started tweeting was a guide to how not to let Twitter make you nuts. Here are some principles I find myself returning to again and again:

1. Someone is always celebrating a success, which is a very different thing from “everyone is constantly celebrating successes,” even if it sometimes feels the same. It will be your turn eventually.

2. There is enough to go around. Of everything. Especially, but not limited to, affection.

3. Even if you can’t see them, people are listening.

4. They can’t see you unless you tell them you’re there. They’re not leaving you out on purpose. (Ask and ye shall receive.)

6. It’s unusual to constantly “overhear” other people’s conversations, so if it occasionally makes you feel weird (in a slightly seventh-grade way), you’re normal.

Contribute a Twitter truth (or just your random thoughts about the world’s most awesome and emotionally complicated social media platform). I will randomly select up to five commenters and gift them ebook copies of Shari Slade’s awesome new adult novella, The Opposite of Nothing. You must be 18 or older and live in a location where I can easily gift you an ebook to win. Contest ends Thursday March 27, 11:59 p.m. EST.

Here’s what you need to know about The Opposite of Nothing (also, that Shari’s voice is gorgeous): 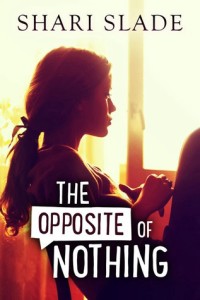 Callie Evans would rather hide out in her DJ sound booth than face the fact that she’s in love with her best friend, notorious campus hottie Tayber King.

Tayber turns hooking up into an art form–no drama, no commitment, no lies, and nobody gets hurt. Nobody but Callie, that is. When she sees an opportunity to explore his sexier side using a fake online profile, she grabs it. Now her uninhibited alter-ego ‘Sasha’ is steaming up the screen, and Callie is breaking all of Tayber’s rules.

As Callie and Tayber get closer, online and off, she knows she has to confess. And risk losing him forever.

**This 35,000 word New Adult novella is for mature readers. It contains strong language and adult situations.**

Previous Tuesday Tidbit: Strangers on a Train & Giveaway Next The Open Road