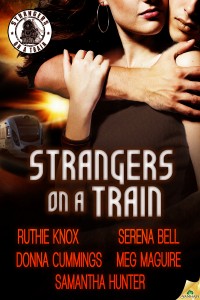 Strangers on a Train is out in paperback!

Today is release day for the paperback edition of Strangers on a Train. This collection was born when Ruthie Knox and Samantha Hunter started riffing on Twitter about a Tumblr featuring photos of unsuspecting sexy male commuters on trains. I joined in, we recruited Donna and Meg to join us, and none of us will ever look at Amtrak the same way again.

This is the first time all five stories have been available for purchase in one volume (it’s on sale right now at Samhain).

There’s an excerpt from Ticket Home below, and I’ll select one random commenter to win a digital ebook copy of any one of the five Strangers on a Train stories (You don’t have to pick Ticket Home—if you don’t, I’ll just assume you’ve already read and loved it :-)).

Contest is open to those 18 and up to whom I can gift an ebook via Amazon or Barnes & Noble (usually U.S. and Canada).

This contest is now closed. Justine is the winner! Thanks to everyone who visited.

Tight Quarters by Samantha Hunter
Reid isn’t happy about the mix-up that saddles him with a claustrophobic roommate on his New York train tour. Then his weekend with Brenna progresses to a weekend fling…

Ticket Home by Serena Bell
Encountering her workaholic ex on her commuter train is the surprise of Amy’s life. Especially since Jeff seems hell-bent on winning her back. A Dear Author Recommended Read.

Thank You for Riding by Meg Maguire
At the end of Caitlin’s commute, her extended flirtation with a handsome stranger finds them facing a frigid winter night locked in an unheated subway station.

Back on Track by Donna Cummings
A wine tour isn’t enough to take Matt’s mind off his baseball slump—until sexy, funny Allie plops into the adjacent seat and tells him three things about herself. One of them, she says, is a lie. Then Allie lets slip one truth too many…

“Is this seat taken?”

Amy had been dozing, her head lolling on the vinyl train seat, a victim of Metro-North’s gently rocking progress over the aging tracks on the way to Manhattan. The sweet shug of well-fitted metal on metal and the slight hitch in the train’s forward motion had soothed her to sleep like a fully He was waiting for her on the platform at the end of the day, leaning against a pillar, a study in male nonchalance.
Her insides got tangled as her heart tried to leap at the same time her stomach tried to sink, and then she knew half of her had hoped he’d go back to Seattle, while the other half had been hoping just as hard he’d be here, on the train again.

As she stepped through the sliding doors, he pushed himself up off the pillar, an uncoiling of muscle, and closed the distance between them. Aligning himself at her side, matching her stride.

She sped up, ran for the train, and he chased her, bounding on behind her and following her up the aisle.

There was, of course, no place to go. No way to get away from him. Unless—

There was a conductor at the end of the car, and she started toward him, but Jeff caught her wrist again and spun her around to face him. He was very close, so close she could see the circles under his eyes and the pale brown stubble on his jaw. So close she could remember the exact feel of that well-formed lower lip.

It was a command. It was a growl. She felt it, everywhere.

“Do you know what I spent my morning doing?”

She shook her head. From behind her, someone said, “Excuse me,” and he sat abruptly in an empty seat and tugged her down to sit beside him. A group of passengers went by and distributed themselves into the seats beyond.

She tried to get up, but he held her firm.

He released her instantly, and she rubbed the place where his fingers had dug into her.

“Your little stunt this morning with the conductor got me detained by the transit police for questioning. Apparently they take ‘See something, say something’ very seriously in the year of the tenth anniversary of September Eleventh.”

“It’s okay. It turns out I don’t have a police record or obvious links with terrorist organizations, and I haven’t traveled out of the country in the last couple of years.”

“Yeah, well. You can make it up to me by not running away again. Okay? Just talk to me.”

“I’m not playing games,” she said. “I don’t want to talk. I don’t want to fix things up. I want you to get off the train and leave me alone. It’s over.”

“And I want you to come home with me.”

He said it so simply, it stopped her dead.