This contest is now closed. Thanks so everyone who stopped by/commented! Jessi Gage is the winner; Jessi, I’ll email you about claiming your prize. 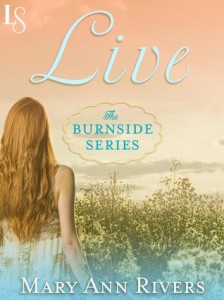 Mary Ann Rivers’ Live releases today. It has food in it, which may not sound like an important distinguishing characteristic, since all characters have to eat to survive (although I did have to have it pointed out to me once by a critique partner that my characters had gone something like eight hours without stopping for a meal), but I have a THING for food in romance. Not, like, chocolate sauce and whipped cream, which I’ve always felt like didn’t belong with bedsheets, but ordinary, garden variety food—made magic.

Like here, in the scene in BET ME where Cal feeds Min the doughnut: 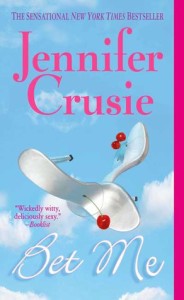 …he popped another piece of doughnut in her mouth and watched as her lips closed over the sweetness. Her face was beautifully blissful, her mouth soft and pouted, her full lower lip glazed with icing, and as she teased the last of the chocolate from her lip, Cal heard a rushing in his ears. The rush became became a whisper– THIS one – and he breathed deeper, and before she could open her eyes, he leaned in and kissed her, tasting the chocolate and the heat of her mouth, and she froze for a moment and then kissed him back, sweet and insistent, blanking out all coherent thought.

I also love this scene from Ruthie Knox’s TRULY (which debuted on Wattpad in serial but is now unavailble ’til it releases in August), where Ben feeds May tacos: 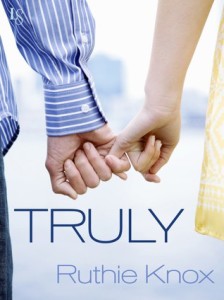 She opened her mouth. Steak juice ran over Ben’s fingers as he pushed the taco onto her tongue. She closed her lips and chewed.

The steak tasted different now—its grilled charcoal overtone perfectly balanced against the sweet caramelized mush of the onions and the creamy citrus taste of fresh guacamole. Mellow and satisfying, with the pop and crunch of chopped jalapeño making the whole thing lively and interesting, hotter than she’d been prepared for.

“Ogh muh gaad,” she said. It was the best thing she’d ever eaten. The best taco in the history of tacos.

Or maybe she was just hungrier than she’d thought.

May nodded, eyes wide, and reached for her taco. Ben handed it over, another one of those almost-smiles flirting with the corner of his mouth.

So almost-attractive, when he almost-smiled. But it was hard for her to focus on whether that meant anything, because on the next bite she had to close her eyes to keep from moaning. It was so good.

So good that she wanted to savor it alone, without interruptions, forever. So good that it brought tears to her eyes. She kept them closed, not wanting Ben to see.

May had nothing to say to that. She was too busy devouring her tacos. She kept eating until she’d plowed through all three, and then she stared wistfully at Ben’s fifth, which lay unclaimed on its plate. Beckoning to her.

The sight of that fifth taco filled her with a lust far greater than anything she’d felt for Dan in a very long time.

May lifted her glass to her lips and drank a sip of water, trying to be cool while simultaneously mourning all the steak tacos she would never get to eat.

When she raised her eyes, Ben was watching her intently.

But of course she knew what. She’d just practically had sex with a tray full of tacos, and now the postcoital embarrassment set in. He saw me naked! With tacos!

“I was hungry,” she said sheepishly.

And now we have a brand-new, totally hot, ordinary food scene from Mary Ann Rivers:

Des watched Hefin pour syrup on a huge stack of pancakes. The syrup container was huge, and he obviously had every intention of using it all. He lifted each pancake in the stack with his fork as he poured, to get the syrup over every surface, and the amber stream spilled over his thumb.

He was totally going to lick his thumb.

And then she was going to lick him.

Which, wasn’t true, but when she sat next to him like this, the wind from the lake making his disobedient hair stand on end and his long-sleeved t-shirt rub against the lean muscles in his chest and the hollows under his collarbones, it felt true. It felt really, really true. It felt so true that when he set the syrup container down and brought his thumb to his mouth, to tuck under that overblown upper lip, and drew his thumb in and sucked off the syrup she fisted her hand because she could sharply perceive that same suction bringing up the blood in her own thumb.

Bringing the blood up everywhere.

And then she was imagining him sucking the ends of her fingers, maybe biting them. She could see him picking the second container of syrup up, and tearing her blouse open and yanking her bra down, and pouring the syrup all over her chest, and then licking her all over. Using his warm fingers to coat her nipples with syrup so he could lick those, too. Because she caught him looking down her blouse earlier, and he looked twice, so A-cups obviously didn’t bother him.

He picked up the second container of syrup, and she made a sound.

“Oh, shite, sorry. Sweet tooth, remember? Since I’m sharing, you probably want some pancake to go with your syrup.”

“No, it’s fine. I mean, you should fix them how you like.” Because her pancake-to-syrup ratio needs was absolutely why she grunted when he picked up the other syrup.

There is more, people. So much more. More pancakes, more fantasizing, a helping of auto-eroticism (sans syrup) … And that is just the very beginning of this scene, which is near the beginning of this amazing, lovely, book that you should go buy right now. And not to dissuade you at all from going and buying it right now, which you should do, but because I just love it and want to spread it around, I am going to give one e-copy of Live to a randomly chosen someone who comments on one of the following things:

—Your favorite (or just any memorable) sexy scene involving food. Can be a movie or book.

—Your opinion on whether food is, in fact, sexy.

—A food item you think is sexy.

You must be 18 or older to win the book and you must live somewhere I can gift an e-book from Barnes & Noble or Amazon. The contest runs ’til 11:59 p.m. on Thursday, January 23rd.