Still So Hot! Is Out! and Giveaway

This contest is now closed. Thank you to everyone who visited and commented. Congratulations to Lori Payer, the contest winner! Lori, I’ll contact you directly about your prize.

Happy New Year! It’s the first day of 2014, and Still So Hot! is officially on bookshelves and etailers’ sites.

Still So Hot! is the story of Elisa Henderson, a dating coach who’s way better at fixing her clients’ love lives than her own. En route to the Caribbean, where she’s headed with her new celebrity client, she runs headlong—literally—into the one man she ever made the mistake of letting herself love. As if that’s not bad enough, the reason Brett Jordan—serial short-term monogamist, ex-best-friend, and all-around hottie—is on Elisa’s flight to begin with is because her client invited him along. And even though a lot of time has passed since Elisa has seen Brett—

Yep. Their chemistry is Still! So! Hot!

Before Still So Hot! got its title—and its exclamation point—it was called Are You With Me? and had a question mark. It is clearly a book that is destined to be surrounded by punctuation. It’s very hard to talk about the book at all without feeling breathless! like! this!

The cover, of course, contributes to the effect: 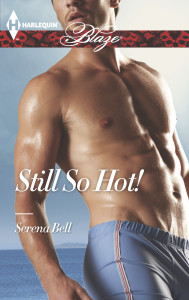 But aside from Brett and his swim trunks, I am a bit breathless, because it’s a great feeling to send a book out in the world, to share it with people, to watch them fall in love with my hero and heroine, too.

I’m also rather breathless with gratitude, because so many people helped get this 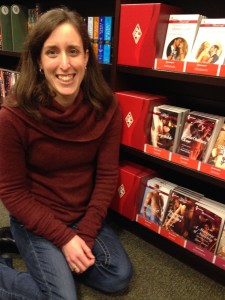 book to where it is. An incredibly supportive husband and kiddos. Author friends who saved my sanity. Amazing critique partners who bore with the book through a ridiculous number of drafts (Ruthie Knox holds the record). A terrific agent who believed in it—Emily Sylvan Kim of Prospect Agency. Three different developmental editors, especially Harlequin’s delightful Dana Hopkins. Harlequin’s talented team of artists, designers, photographers, copy & production editors, and marketing and promo geniuses. And readers, reviewers, and bloggers who’ve given the book a chance and put their time into promoting, advance-reading, and reviewing it. I couldn’t have done it without any of you. (There are exclamation points in my heart!) 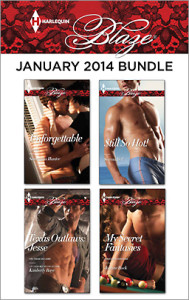 In addition, I’m feeling lucky to have new partners this time around—Blaze shelf mates. Still So Hot! debuts alongside Unforgettable by Samantha Hunter, Texas Outlaws: Jesse by USA TODAY bestselling author Kimberly Raye, and My Secret Fantasies by NEW YORK TIMES bestselling author Joanne Rock. And it’s in honor of them that I am doing today’s giveaway (in lieu of my usual Tuesday Tidbit giveaway that would have appeared yesterday):

Please comment by January 5, 2013, 11:59 p.m. PST on anything that you feel deserves a (positive) exclamation point today (don’t forget the actual exclamation point, please!), and I’ll choose one random commenter to win the entire January Blaze ebook bundle detailed above. (If you win and you don’t read ebooks, you can elect to receive a signed copy of Still So Hot! instead.) You must be over 18 to enter; U.S. and Canada only, please.

Excerpt from Still So Hot!

Elisa Henderson had imagined worst-case-scenario headlines even before her plane took off.

God, this was not comforting. She needed to get up. She needed to move. Most of all, she needed to find out whether Celine Carr had made the flight. But she couldn’t do that until the Fasten Seat Belt sign blinked off.

She’d gotten Celine’s text just as Elisa had arrived at the gate. Thru security. Gotta pee. Board without me. She’d taken her seat in coach—alone, since Celine had claimed the last available in first class. Elisa tried to catch a glimpse of Celine, but the aisles were filled with other passengers. By the time Elisa had realized they were about to take off, she still didn’t know if Celine was on the plane, and the flight attendants wouldn’t let Elisa up. She’d tried to call and text Celine a million times, until a redheaded flight attendant pleaded with Elisa to put the cell phone away before she got them both in trouble.

Now all she could do was cross her fingers and try not to fidget.

Think positive. She’s on the plane. She’s raring to go.

This is the weekend you teach her that she calls the shots. That she controls her dating destiny.

This is the weekend you make hiring a dating coach the new black.

She took a few deep breaths and focused on positive visualization, which always helped her beat stress: Celine, sitting in first class, smiling and signing autographs, ready to make the best promo video ever. Celine, strolling the white-sand beach at the edge of the aquamarine Caribbean, hair blowing in the breeze, beside a handsome, attentive man. Celine, confident and competent, beaming her appreciation as she said to Elisa, Thank you. You helped me see that I didn’t have to keep making the same dating mistakes. The right man was out there. Imaginary Celine tossed her hair, gave her guy a sidelong glance and linked her fingers through his. Thank you for this wonderful man.

Elisa loved the thrill of the match, the click of satisfaction she felt when she fit two people together like puzzle pieces. Plus, she loved running boot camps, intensive one-on-one weekends where she observed her clients in real-world dating situations and taught them new strategies. These weekends were a great chance to get to know a client well, learn her quirks and boost her self-esteem. And who could argue with a weekend in the Caribbean? Elisa was lucky that her sister’s friend knew Celine’s publicist, Haven, and had been willing to put them in touch. And maybe a little bit lucky, too, that Celine was already undergoing a major image revamp as Haven tried to halt her slide toward celebrity train wreck. It hadn’t been too hard to convince Haven that a high-profile boot camp could turn Celine into a dating role model instead of someone whose antics reporters mocked. And if Elisa could make that happen for a rising star like Celine Carr, she’d have the added bonus of building her business’s brand in a big way.

On the other hand, if Celine had missed the flight, Elisa would step off this plane into a barrage of firing flashbulbs and mocking voices calling out, “Where is she?”

Rendezvous Dating? Isn’t that the business run by Elisa Henderson? The one who lost Celine Carr on the way to St. Barts?

She knocked her head against the back of the seat and closed her eyes.

The seat belt chime sounded. She unbuckled herself and hurried down the aisle.

“Whoa,” said a deep voice, very close. She drew up abruptly to avoid a collision, and, for a moment, her mind was overwhelmed by a confusion of hands steadying her, a broad chest blocking her view and the smell of soap.

Then the voice said, “Lise?”

No. No. It wasn’t possible. She knew that voice. Way too well. That voice represented a years-old friendship and B-grade movies and Chinese takeout and Scrabble games and that bar they’d gone to so often, the Aquarium…

The eerie light of that bar, a blue-tinged drunken haze, the stumbling walk home, her couch, his fingers in her hair, the taste of a mouth she’d longed for so badly she hadn’t admitted it to herself, his tongue stroking hers, waking up every nerve ending in her entire body…

What the hell was Brett Jordan doing on her flight to the Caribbean?

She lifted her gaze and, unwillingly, took him in.

Dark hair, just long enough to be tousled. Harder-edged and squarer-jawed than he’d been at twenty-five. But cute, too—a vague upturn at the end of his nose, a slight cleft in his chin and the suggestion of dimples. He was the very definition of masculinity—and he wasn’t much farther from her face than he’d been that night when he’d finally, finally lowered his lips to hers.

Two years hadn’t quenched one ounce of the thirst. She could feel it, a sharp want that lit up all the tender parts of her mouth. She could feel it in her teeth, too. She’d nipped his lower lip that night, and he’d made a sound that didn’t have a name.

She wanted to close her eyes and shut him out—and she wanted him to pick up where he’d left off.

Oh, of all the cosmic slaps across the face. No. Please no. Not him. Not now.