Yours to Keep pretties

Loveswept made me these beautiful graphics for my upcoming Yours to Keep blog tour, October 28-November 22. I’ll keep you updated as I get more info about specific stops on the tour.

Yours to Keep is, according to its cover copy, the captivating story of a woman living on the edge—and the man who’s destined to love her.

Ana Travares has been looking over her shoulder her whole life. Her U.S. visa expired when she was a young girl, and if her secret is discovered, she’ll be forced to return to the Dom 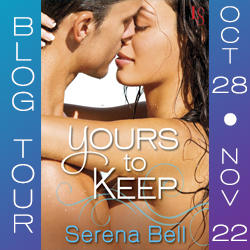 Ana allowed herself to get close to someone once before—and after he broke her heart, she swore never to make the same mistake again. But when a handsome doctor asks for her assistance, she fantasizes about breaking all her rules.

Even though pediatrician Ethan Hansen is a natural when it comes to little kids, as the single father of a teenage son he just can’t seem to get it right . . . except for the Spanish tutor he’s hired for his son, Theo. Ana has managed to crack Theo’s shell—and he isn’t the only one taken with her. The sexy tutor has fired up Ethan with a potent mix of lust and protectiveness.

But as he starts to envision a future with Ana, Ethan is devastated to learn the truth about her citizenship. Somehow he’s got to find a way to help her—and hold on to the woman he’s falling hopelessly in love with.

Previous My Debut Novella Is Out! Next Enter the HEATING UP THE HOLIDAYS Goodreads Giveaway + Sweepstakes!