My Debut Novella Is Out! 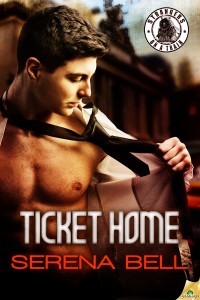 Today is release day for the Strangers on a Train series—taglined “romancing the rails.” In my story, Ticket Home, the heroine’s workaholic ex stalks her train commute, hell-bent on winning her back. If he doesn’t get himself arrested, he’ll do his best to remind her of exactly what she’s been missing!

I’m lucky to have worked on this project with four other amazing authors: Donna Cummings, Samantha Hunter, Ruthie Knox, and Meg Maguire, each of whom has a separate story in the collection.

The series has a really fun genesis—Ruthie and Sam were chatting on Twitter about the Tumblr “Hot Guys on a Train,” in which unsuspecting beautiful males are photographed as they ride, and the conversation turned to how much fun it would be to write a series of romances that take place on trains. The rest of us got drawn into/recruited to the project, and these five very different stories grew out of one prompt: Write about strangers on a train.

You can see/buy all the stories here:

Please also join us on our blog tour—all the stops are listed here. There are many chances to win each of the stories individually and/or complete sets of all five stories. Today, we’ll be at four different locations, giving away full sets of the book. Serena Bell will be at Romance@Random, Ruthie Knox will be at FictionVixen and Meg Maguire will be at Smexybooks. All five authors will visit HEA USA Today.

It was a command. It was a growl. She felt it, everywhere.

“Do you know what I spent my morning doing?”

She shook her head. From behind her, someone said, “Excuse me,” and Jeff sat abruptly in an empty seat and tugged her down to sit beside him. A group of passengers went by and distributed themselves into the seats beyond.

She tried to get up, but he held her firm.

He released her instantly, and she rubbed the place where his fingers had dug into her.

“Your little stunt this morning with the conductor got me detained by the transit police for questioning. Apparently they take ‘See something, say something’ very seriously in the year of the tenth anniversary of September Eleventh.”

“It’s okay. It turns out I don’t have a police record or obvious links with terrorist organizations, and I haven’t traveled out of the country in the last couple of years.”

“Yeah, well. You can make it up to me by not running away. Okay? Just talk to me.”

“I’m not playing games,” she said. “I don’t want to talk. I don’t want to fix things up. I want you to get off the train and leave me alone. It’s over.”

“And I want you to come home with me.”

He said it so simply, it stopped her dead.